RPC Frameworks: gRPC vs Thrift vs RPyC for python

The year was 2015. I was writing a bunch of ML training scripts as well as several production scripts. They all needed financial data. Data was spread across multiple tables and multiple datastores. Intraday market data was stored differently in a cassandra cluster, while the daily/monthly data was in a MySQL database. Similarly, different types of securities (Future, Option, Stock etc.) were stored in different locations.

So, I decided to make a data library that I can use in my scripts. This data library turned out to be quite popular with my team. It had all the things we needed at that point:

However, it had some fatal flaws that I could not foresee at that point. Over time, the number of production scripts relying on this library grew exponentially. Our data library directly called database queries.

About a year ago, I was asked if we should convert that library to a service. I brushed it away - not realizing the problems I was going to face in the next year. To be fair, I didn’t fully understand the services or microservices at that point - that made me skeptical of its use for something like data fetching. I was still convinced the flexibility and rapid changes would only come from having that code as a library.

But, I finally started taking another look at services a few days ago. I looked at gRPC, Thrift and RPyC over the past few days. I am summarizing my initial findings in this post. Because I mostly use python for everything, I am approaching these frameworks from that point of view.

You can find the code for the subsequent examples in this repo.

gGPC uses Protocol Buffers for serialization and deserialization. It was developed by Google - they released this as an open source software when they were rewriting their internal framework called stubby. At the moment, several companies including Netflix and Square are using this framework to implement their services.

We will use the same toy example for all 3 frameworks:

And here’s a bit of explanation of the above code. 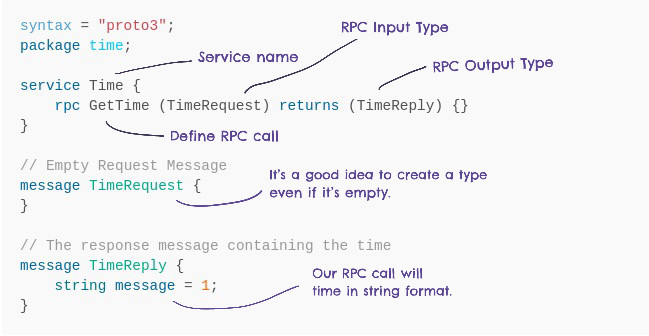 Now, use the above protobuf file to generate python files time_pb2.py and time_pb2_grpc.py. We will use them for both our server and client code. Here’s the command line code to do so (you will need the grpcio-tools python package):

And here’s the annotated server code: 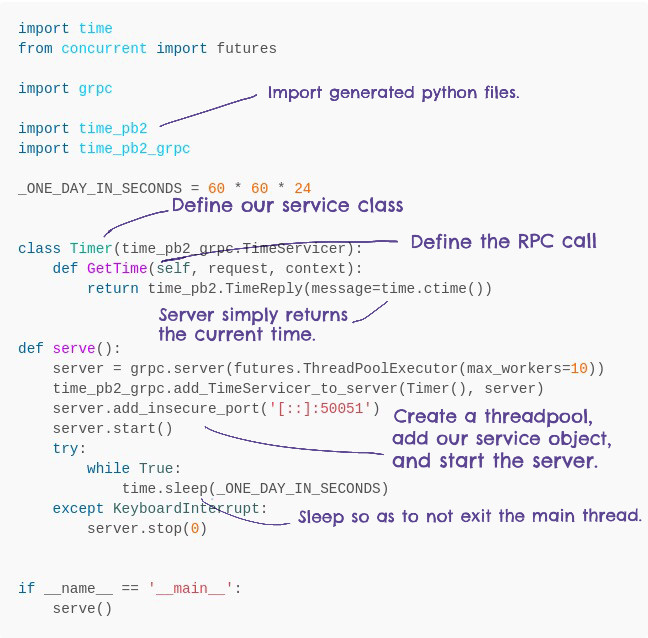 I have added the annotated client code below. 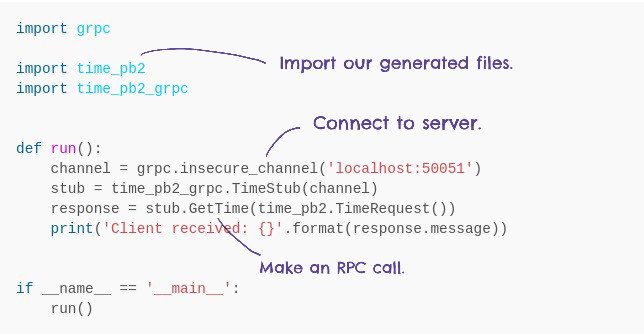 gRPC uses HTTP/2 for client-server communication. Every RPC call is a separate stream in the same TCP/IP connection.

gRPC comes with an inbuilt timeout functionality. This is quite handy in practice. Many applications require a response within a certain time interval.

Run the following command to generate python code. It will create a gen-py directory. We will use it to build Server and Client scripts.

Write the following code in client.py.

RPyC is a pure python RPC framework. It does not support multiple languages. If your entire codebase is in python, this could be an easy and flexible framework for you.

Let me summarize my experiences here before jumping into the details of each framework.

Notes on the above table:

Other important things to note:

You can find the code for the above examples in this repo.