Here is the link to the paper.

Highlights of this paper are:

Youtube recommendation problem is to maximize the expected watch time per impression (as opposed to click probability). Click-through rate often promotes deceptive videos that the user does not complete (“clickbait”) where as watch time better captures engagement.

They differentiate between the online metric and the offline metrics:

Since the final deployment is only through the A/B testing framework, they constantly work through various metrics to find better correlation to the observed interactions. 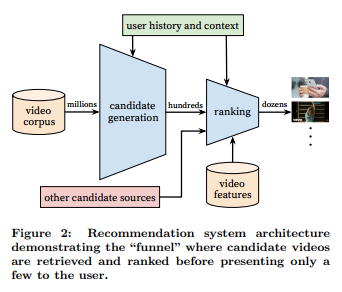 where represents an embedding of the user, context pair and represent embeddings of videos. The task of the neural network is to learn the user embeddings as a function of the user’s history and context.

One problem with extreme multiclass classification in neural networks is the inefficient backpropagation. If the forward and backward passes are computed for over the entire corpus of millions of videos for every true label, it would be terribly inefficient. A similar problem arises in the word2vec model. Some tricks to make this efficient include Hierarchical Softmax and Negative Sampling (This blog post by Sebastian Ruder has an excellent comparison between various approaches).

A key advantage of using deep neural networks as generalization of matrix factorization is that arbitrary continuous and categorical features can be easily added to the model. Search history as well as watch history are used as features in this model. In both cases, the embeddings are averaged before being fed into the network. The user’s geographic region and the device type are embedded and concatenated. Simple binary and continuous features su as the user’s gender, logged-in state and age are input directly into the network as real values normalized to [0, 1].

Ranking model is similar to the candidate generation model. Since there are only hundreds of videos at this stage, the model is given access to a rich set of features describing the videos and the user context pair.

Since the goal is to predict expected watch time, each positive impression (video impression was clicked) is weighted by the observed watch time on the video. This weighted impressions are then learned by weighted logistic regression. For inference, they simply use the exponential function to obtain the probabilities.

Details of the model are shown in the following image.